On a hot summer day (is there any other kind in Puglia during July and August?), we joined our friends Katia and Davide and rolled up to the newest Eataly outpost in Puglia’s big city, Bari. Surprisingly, the experience has left us with a growing unease about the future of Italian food and its local, family-based culture. Eataly is many things, shining a light as it does on Italian cultural devotion to its extraordinary materia prima (base ingredients). But herein lies the paradox. Large-scale food sourcing, corporate advertising and an ever-increasing distance from farm to table threatens the very premise Eataly’s champions aim to promote.

Eataly, Italy’s high-end food emporium chain, is the brainchild of Piemontese entrepreneur Oscar Farinetti. Now joined by a growing cadre of corporate food interests, the empire was launched in 2007 with the first location in Turin. Housed in a converted vermouth factory, The New York Times has described it as a “megastore” that “combines elements of a bustling European open market, a Whole-Foods-style supermarket, a high-end food court and a New Age learning center.” In short order, the flagship was joined by nine locations in Italy, another in Tokyo, Japan and the highly profitable New York outpost. The first store in southern Italy joined the ranks on Wednesday, July 31, amid the usual Italian last minute kerfuffle about permits and permissions. 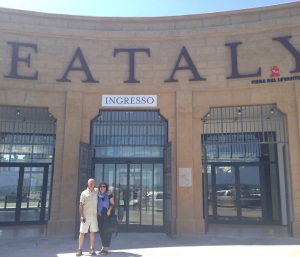 Perched on the edge of lungomare, Eataly Bari has an imposing edifice facing the Adriactic Sea.

Eataly is impressive—it is designed to be. Not unlike the soaring, larger than life churches that dominate the urban and rural landscape in Italy, most of the Eataly stores are housed in 60,000 square foot buildings with soaring ceilings and vast floor plans that occupy entire city blocks. The Bari store is located in the crumbling Fiera del Levante, a former trade fair location, on the waterfront in this bustling port city. Staff is everywhere, clothed in Eataly t-shirts, chef coats or—this is Italy—white linen shirts and form-fitting khaki trousers with sockless slip-on loafers for the mostly male managers. On our visit, the staff outnumbered the customers, most of whom were, like us, deeply curious about the newest entry in Bari’s busy commercial life. 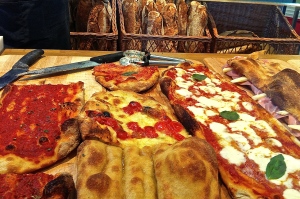 The megastore is divided into reasonable sub-stores and departments, a plan that is duplicated in all of its locations. From the well-equipped bookstore featuring food topics in multiple languages to the bakery, we could have lived inside happily for a month, wandering aimlessly through the artfully presented produce stalls to the fish market and back again. In this way, Eataly offers a glossy, yet painstakingly ordered world. And then we looked deeper. 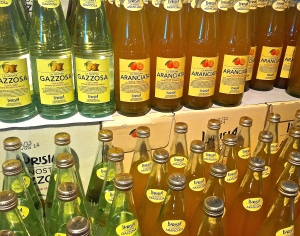 Lurisia is one of Eataly’s corporate partners, dominating the shelf space and countertops in the water and soda category.

Eataly’s owners and investors have engaged a series of multinational food and food product companies to partner in delivering Italy’s culinary largesse to the world. These partnerships are hard to ignore. Far from promoting the genuine, authentic, small farm-derived food of Italy, the celebrated collaborators represent really big business in Italy. From the dominant  Italian grocery store chain Coop to Farinetti’s own Gragnano pasta, most of the products that populate Eataly’s shelves are a long way away from the small production, artisanal offerings Eataly purports to champion. Many of these corporate food chains have negotiated exclusive agreements with Eataly, rendering it impossible for small producers of exceptional quality to find a place on the international food stage through an association with Eataly. And where are those extraordinary, artisanal products? They’re still sold at the source on the farm, in the weekly markets and in alimentari (neighborhood grocery shops) all over Italy. You’d be hard pressed to find them at Eataly. 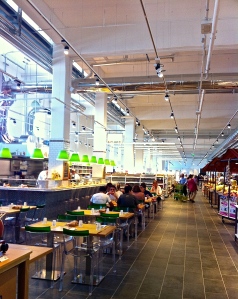 This food counter celebrates vegetables, but the menu was a little limited given the array of food on offer everywhere else at Eataly.

It wasn’t hard to forgo the various dining options on offer at Eataly. Unlike the Rome store, each food genre is represented by a dining outpost that features only that limited range of items. Unless you are convinced that you only want to eat meat or pasta, it’s a forced choice that is curiously at odds with overwhelming abundance of offerings on the shelves. And if you’re in a group, it’s almost impossible to reach consensus so that you might all dine together at, say, the fish counter. 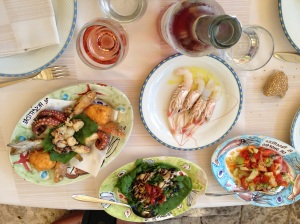 Al Pescatore at the edge of Bari Vecchia celebrates what Italian food culture at the table is all about.

Like our fellow gawkers, we left Eataly with a few bags of pasta, some salt-packed anchovies and a lovely Pugliese rosè we’d been meaning to try in our basket.  We beat a hasty retreat to a nearby trattoria that caters to Barese diners who demand extraordinary seafood, most of which is served raw. We tucked into a resplendent antipasto di mare (seafood appetizer) so fresh it seemed to have leapt from the Adriatic across the street and onto our plates. The contrast between the seafood counter at Eataly and the convivial, deeply Italian feeling of the trattoria was stark. The emporium we just left is a monument to a threatened, perhaps slowly disappearing Italian food culture. The irony is that Eataly just may help speed its demise. 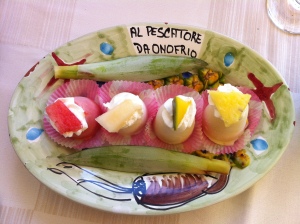