Posts from the ‘Recipes’ Category

Sunday lunch in Italy means family, friends and lots of extraordinary food. We made ours in California as we put the final touches on our Pascarosa Insider's Food and Wine Tours for October 2017.

END_OF_DOCUMENT_TOKEN_TO_BE_REPLACED

It's raining in California, with storm after storm pounding the coast. We're holing up with osso buco, Italy's hole-in-one braise that satisfies the bone-weary among us.

END_OF_DOCUMENT_TOKEN_TO_BE_REPLACED

In troubled times, simple pleasures like home cooking and the company of friends are enough to soothe the soul.

END_OF_DOCUMENT_TOKEN_TO_BE_REPLACED

L’Immacolata wants you to eat fish on Christmas Eve.

It’s unusually cold in coastal California—a chilly 50 degrees Fahrenheit in our little valley with frost blanketing the landscape at night. The horses wintering over in our pasture have grown sturdy winter coats, their collective breath rising like steam from a boiling pot. We’re bundled up and filled with joy as we prepare to spend the first Christmas in with our family since we moved to Italy. END_OF_DOCUMENT_TOKEN_TO_BE_REPLACED

November means it’s time to harvest olives in Puglia, a job we welcomed with open arms this year after the disastrous 2014 harvest.

This isn’t the first time I’ve had a l-o-n-g dry spell between posts, so I won’t offer any excuses (disabled computer, lack of good Wi-Fi, sudden finger paralysis . . . anything else?). No, it seems my utter failure to organize my thoughts isn’t particularly dramatic, but it is something of a metaphor for our lives lately. Let me elaborate. END_OF_DOCUMENT_TOKEN_TO_BE_REPLACED 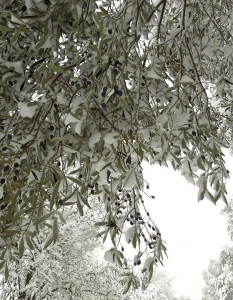 The temperature here is dropping as I write. Snow flurries and high winds blew in last night, but today’s snowfall is almost an afterthought, with patches of brilliant blue sky behind ominous clouds. Maybe it’s counter-intuitive, but we welcome the chill if it will lay waste to the olive fly larvae that burrow in the soil of our olive grove. There’s little else to do but stay inside and cook while entertaining visions of insect death and destruction, hoping the incongruity of these two activities doesn’t indicate something troubling about my state of mind. END_OF_DOCUMENT_TOKEN_TO_BE_REPLACED

Italy’s answer to the United States’ Groundhog Day came and went yesterday, confirming that we can expect another six weeks of winter here. This isn’t altogether bad news. We’re hoping for a proper freeze, enough to exterminate any dormant olive fly larvae wintering over in the soil of local olive groves. Nothing too extreme, though, since extreme cold at the wrong time (like early spring) represents another kind of trouble for olive farmers. So we’re hunkering down, but consoling ourselves with long walks, recipes that involve a long stove-top simmer and the occasional crunch of chiacchiere, those crackling, light-as-a-feather Italian carnevale sweets that are impossible to stop eating. END_OF_DOCUMENT_TOKEN_TO_BE_REPLACED

The Worst Year Ever

We harvested the few olives that were on our trees early this year, escaping olive fly infestation. Unfortunately, we just didn’t produce enough.

Maybe you’ve been following the Italian and Spanish olive harvest news this year. If so, it won’t come as a surprise that 2014 will be remembered as one of the worst years in history for premium olive oil. For a variety of reasons, olive oil production is down by as much as 40% overall in Italy this year. And for premium extra virgin and organic olive oils, the situation is even worse. END_OF_DOCUMENT_TOKEN_TO_BE_REPLACED

After the eating endurance event known as a southern Italian holiday season, we’re tightening our belts. Or at least we’re making an effort in hopes of tightening them. Pasta al forno, that decadent layered masterpiece of the Christmas table here, has been banished from ours. Likewise the zampone, a pig’s trotter stuffed with, yes, more pork, is off the list. And the pettole? Those deep-fried puffs of yeasty dough immersed in vanilla-scented sugar are now just a guilt-tinged memory. But if you think we’re resigned to insipid plates of sad, boiled vegetables, you are dead wrong. We’ve embraced a world of flavor with the bounty of Puglia’s winter vegetable, fruit, grain, nut, seed and legume harvest. And Puglia’s seafood and farm players still figure in the equation, playing a supporting role to great effect. END_OF_DOCUMENT_TOKEN_TO_BE_REPLACED