Spring is devoted to orchard maintenance and pruning is the order of the day.

With capricious spring weather keeping us on our toes, we are skipping through the last week of Italian Lent (Quaresima) towards Easter Sunday in Martina Franca. The signs, both sacred and profane, are everywhere. Elderly residents strolled through town yesterday toting palm leaves and olive branches on Palm Sunday mass, enormous chocolate Easter eggs compete for attention in shop windows and the fruits and vegetables we’ve craved all winter long are arriving in weekly market stalls. END_OF_DOCUMENT_TOKEN_TO_BE_REPLACED 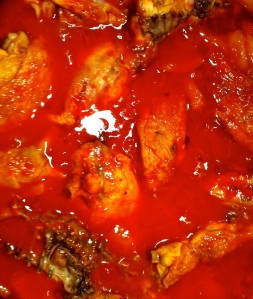 Tomatoes, red and yellow peppers and chicken simmer together for Pollo alla Romana.

Now that carnevale is over and we are immersed in the 40 sober, reflective days of quaresima (Lent), you would think that the excess of the Pugliese table would be significantly dialed back. But you would be wrong. Yes, the delightful chiacchiere carnival sweets are officially off the menu and there is a renewed observance of meatless Friday, but the butcher shops in Martina Franca seem just as busy as ever. Still, we’re seizing the moment to engage in some Lenten deprivation of our own if we are to hold our heads high at the beach this summer. END_OF_DOCUMENT_TOKEN_TO_BE_REPLACED 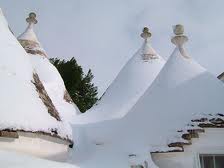 The first serious snow of the season in the Valle d’Itria.

Old-timers here say it doesn’t snow here the way it used to when they were young. Whenever the conversation turns to weather, which happens during just about every chat we have, we learn about the ferocious winters of old, with howling winds and weeks and weeks of snow. Nowadays, they say, we might have a light dusting of snow in the Valle d’Itria, but it will be gone in the morning as though it never happened. END_OF_DOCUMENT_TOKEN_TO_BE_REPLACED